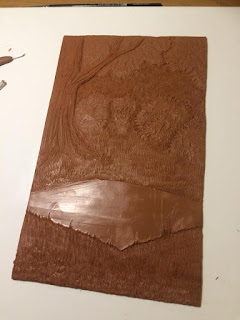 Today I decided to write about my newest journal, which I called in a very simple way "The Bunny Family Journal"( A5 size).  It seems like that the story of my bunnie's love for each other continues....


This was a custom order from an older client lady. She has a son and him and his wife are expecting their second baby in the first weeks of August. It's going to be a boy!
So my client, as a very proud Grandmother, ordered this journal to give as a gift to her daughter in law. I thought this is so sweet and she particularly loved my bunny journals and so we developed this concept of a 4 member family having a little picnic in the park. She said they will end up living in Texas and so she wanted some flowers from that place to be shown on the journal too. That's why I places some Lupins and other flowers.
Ashley always tells me that I have to work on my background scenes more as sometimes my pieces look too flat and then one massive bulky character stands in the middle of it all.
So this time I decided to properly sculpt all of the background first. As it was a park picnic scene, I needed to have the picnic blanket laying on some grass and to make the scene more intimidating and give a feel of a park, I added some Hydrangea bushes and a beautiful large tree on the background. Kinda made the whole scene look more zoned out from the rest of the world. This is type of spaces I like for the picnic. Little pockets of privacy :) 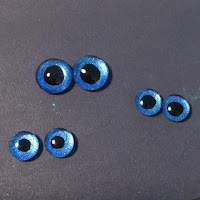 First thing I always consider when making clay creatures, is their eyes. I believe that eyes is the mirror of the soul and most of my artworks are looking so alive because of the eyes. So I had to make them first. The whole family is blue-eyed in real life and so I had to stick to this hue.
Now.. I am quite ashamed to put the first appearance pictures of my Bunnies on this brown clay background, because I decided to sculpt all of their naked bodies first to see where she shapes go, how to position them and so on and then to dress them up in clothes. But because they were naked and very primitively shaped, this looked like a very awkward scene. So no, I am not showing it. We have under 18-teens here :)

But here is the shot from the moment when I dressed them up! And it looks very descent. I struggled with positioning the father bunny and it was quite hard to make mother bunny's arms holding the baby. So I used some human realistic shots for reference to understand where which part of the body goes. You might be surprised hearing this, but I am very bad at human proportions. I think sculpting
human body is the hardest thing of all. 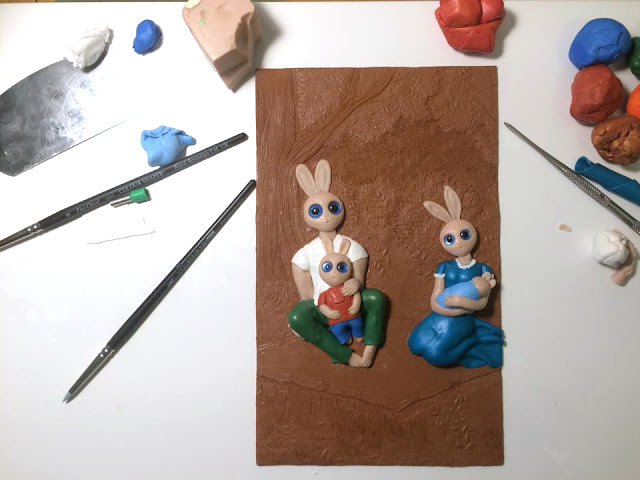 So then I needed to understand how to blend the foreground and background together. I wasn't sure I will make it successfully with paints, so I decided to use my super set of eyeshadows which I love badly. It is, in my opinion, so much better than pastels. I just can't get hold of pastels still. But with these, they stick to your brush nicely, colours are very vibrant. You would always need to seal it after baking of course, otherwise some of the colour may still disappear.
Anyway, I ended up here and I was very pleased with how the colours looked like. 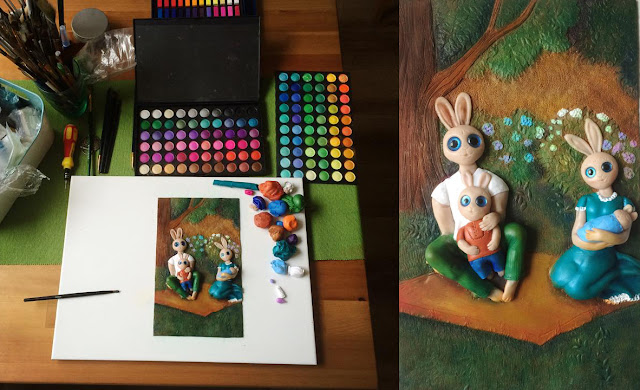 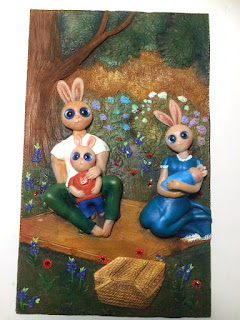 After adding up some details like flowers, more volume to the tree and picnic basket, I finally baked it! I knew that if I wash this in cold water to cool it off faster, the colours will fade, so I waited for it to cool naturally. After it cooled I started painting it with oil colours, first raw umber to enhance the outlines and small sculpted details, then other colours to make the grass brighter and so on. But I ended up messing it up a bit, because when I started rubbing off excess paint with wet whipes, the shadow also rubbed off. So next day I had to repaint it with acrylics. I regret that red flowers became much darker after the final painting was complete. I added some red colour, but still it wasn't as bright and vibrant as it was before baking. After all the paint was applied, I did a layer of antique gold in dry brushing technique to highlight the highest points of the journal surface and also did Guilders Paste patina effect over some places to add up more colour, definition and to brighten things up. I started to like the artwork so much more after that. It is always a big surprise what patina can do to your artwork.

So this is what I ended up with. Please enjoy and let me know what you think. I am welcoming technical suggestions on how I could improve this piece, or improve my sculpting, decorating and colouring techniques. Please, don't be shy. I would love some positive criticism! 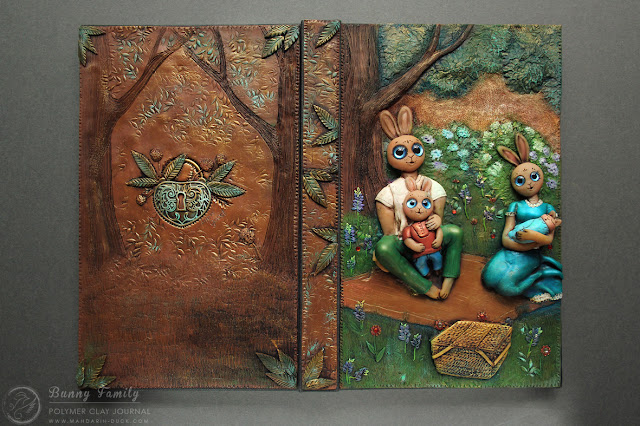 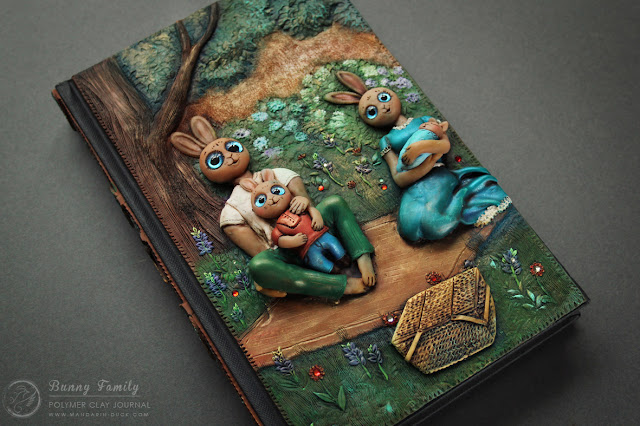 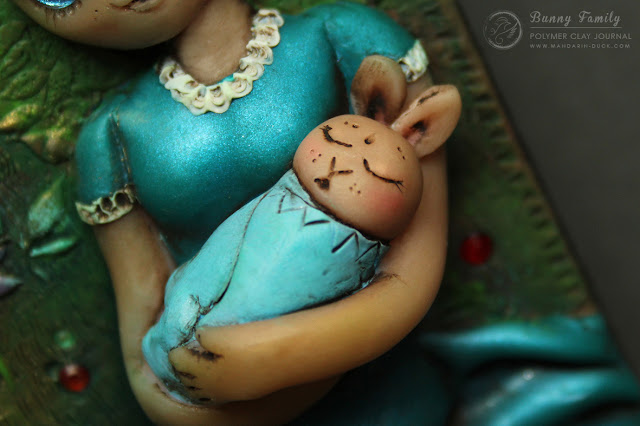 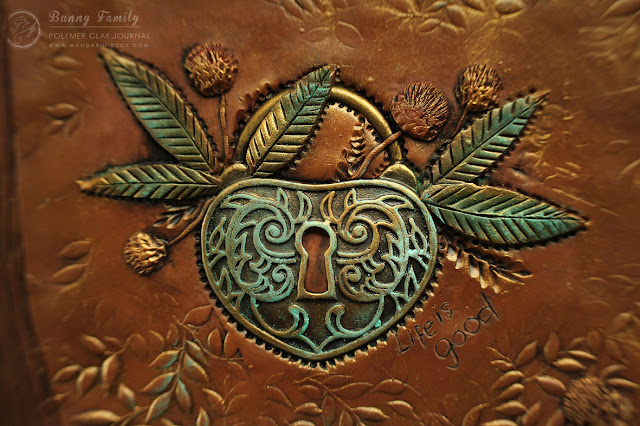 My client really wanted the moto somewhere on the journal... "Life is Good" .. As this is something their Grandfather used to say and so this stuck as a family tradition. As I cherish family traditions a lot, I couldn't resist to agree and write it.

In any way,
Thanks for reading :)

Posted by Mandarinduck at 06:38 No comments:

Wait for me by the Lighthouse ( end of the story)

Some of you may remember that I had a pair of journals made with a female and male bunny about a year ago. Here is the picture to refresh your memory :) 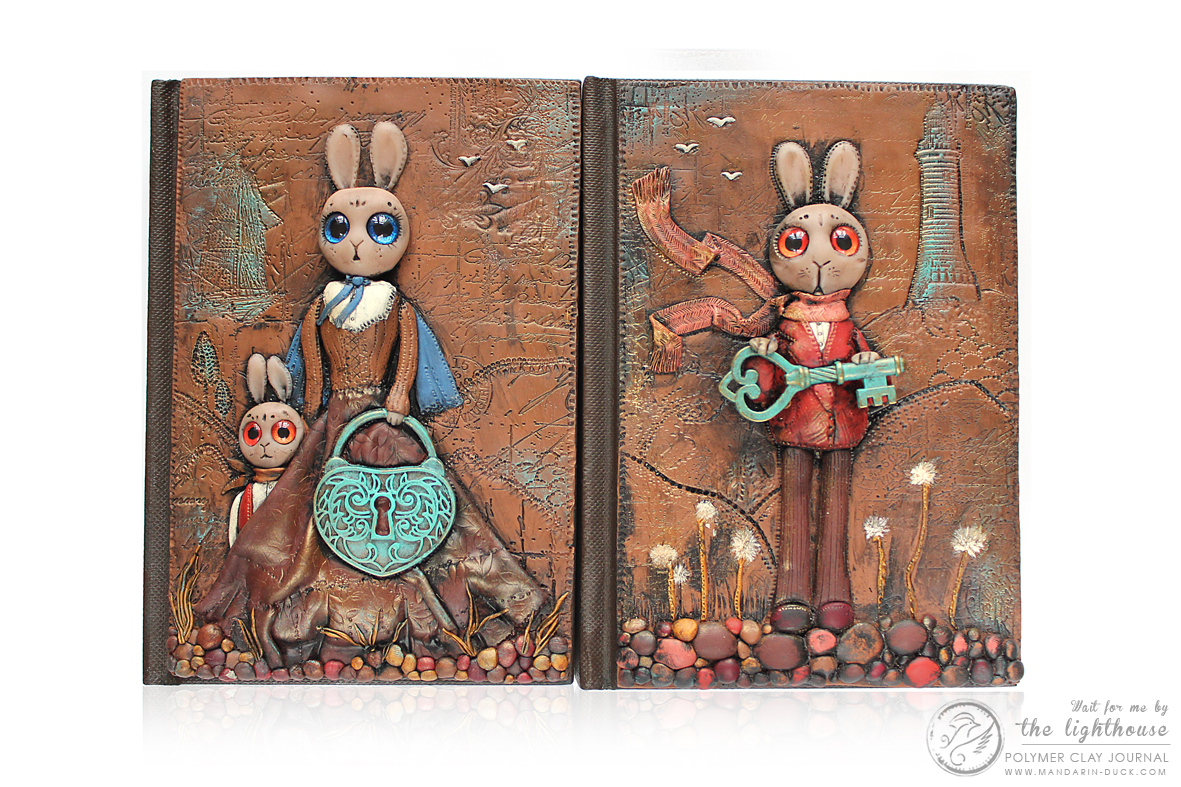 The main story of these journals was that both male and female were separated when they were very young lovers and they only managed to find each in another 10 years. So my journals are showing that particular moment of their date by the lighthouse. They both became much older, but they still recognise each other and she is holding a bag in her hand that looks like a lock, the lock from her heart. And he still has a key to this heart lock, meaning that he still loves him. And of course she does as well, especially because for 10 years she had someone that would everyday remind her about him while they were apart... their child. READ FULL STORY.

So the idea of this pair of journals was that they would be sold together and I proposed this idea in my Etsy shop. But one day the female journal was purchased by a guy from England and he refused to buy the second one. This made my heart hurt, but of course from the business side of view I made a sale and I was happy. And so the year passed and the journal wouldn't sell. I brought it with me to
Malta Synergy conference and many of you had seen it in person and who ever had a chance to speak to me heart the story of this and the second journal. In the end of conference I gave away all of my journals and only left one of them with me, the other bunny journal.
Yesterday I sold a journal with a beetle and this made me very happy, but something felt weird. I recognised the name of my customer and it had a little green star next to it meaning that this is a return customer. I checked and it was the same guy who purchased my female bunny journal. 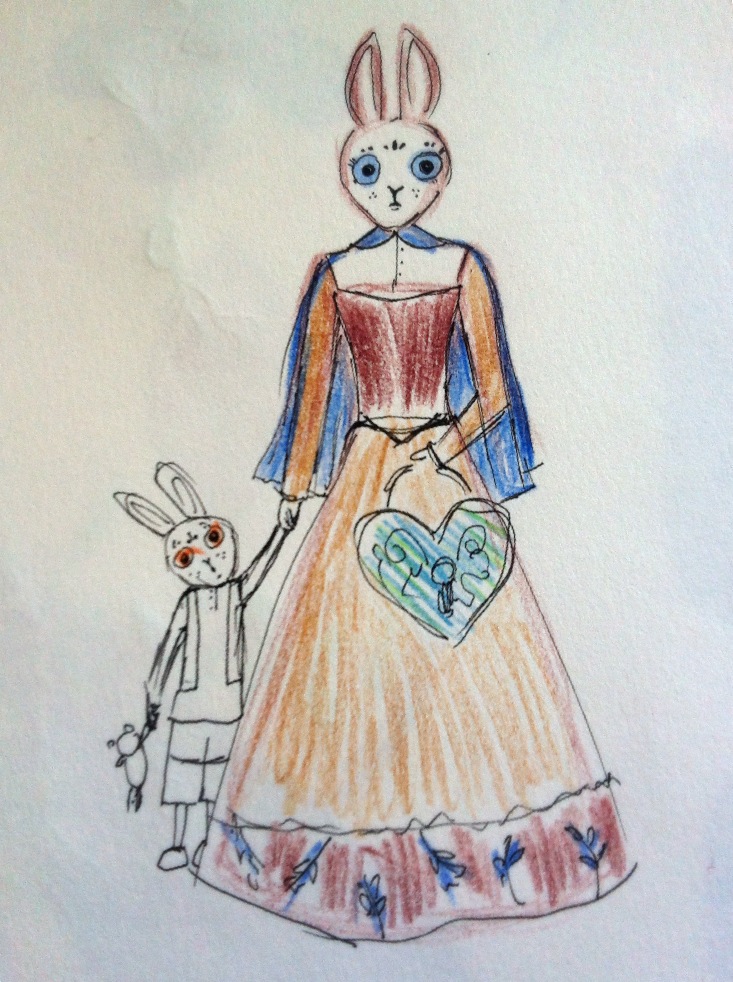 You can imagine how happy I was that he came back! The fact that he came back meant two things for me. First, his wife had finished the first journal and second, she needs another one. And why would she want to have a beetle journal if there is a second part of the bunny story for her. So I wrote a message to the guy and offered him bunny journal half price just so that his wife can have them both and keep them together. Also, because he came back for another journal, I knew they don't waste them, they fill them in and then keep them. Otherwise why would he come back to me? Not for the paper quality, right? :)
And so to make the story short, he decided to buy the beetle journal and the bunny journal together and he was very happy to have a discount. He is not a very talkative man and after a massive story I wrote to him he only replied in one line. But this one like made me completely happy and now I am feeling content and I know that the wondering of two loving souls is now officially over. The bunny family is safe and sound.
As you can see polymer clay means much more than just sculpting to me. I am a story teller and I am very very grateful to God that this unfinished story is now found it's happy ending. I can now silently say:


"All so all three of them lived happily ever after...here in England, Gloucestershire!" 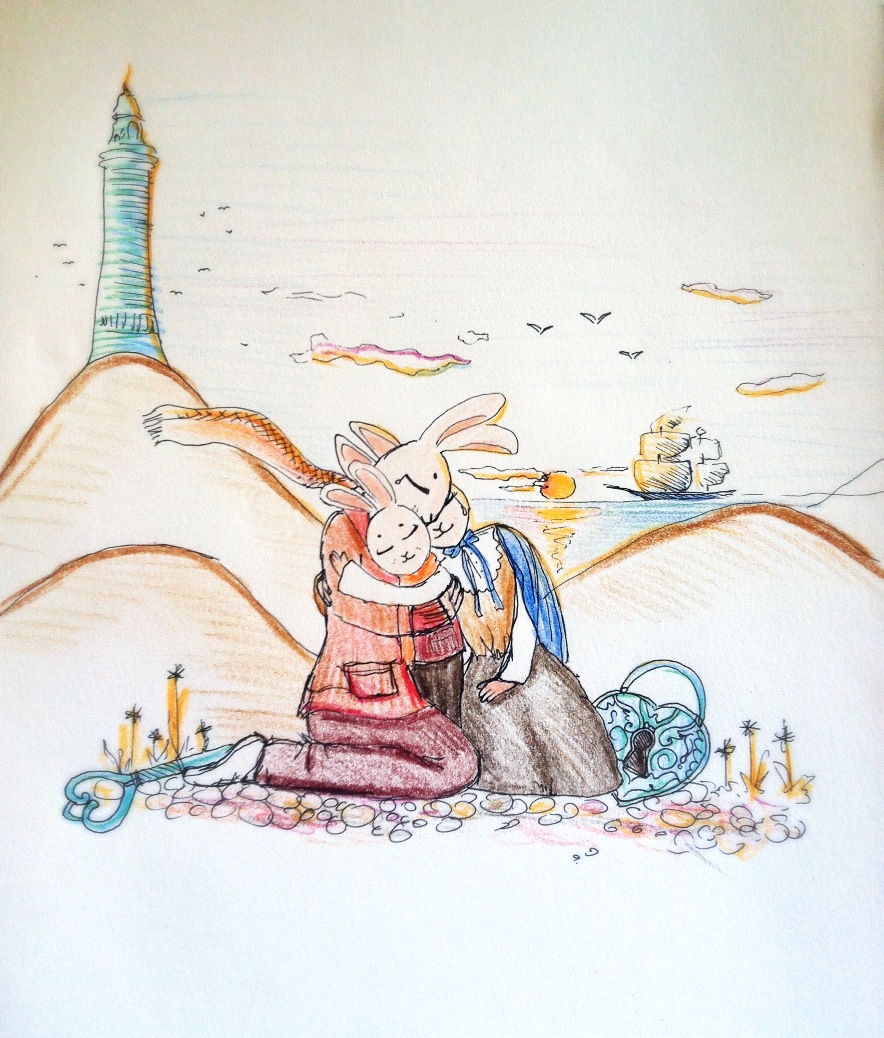