Today I would like to share my newest journal with you which I named "Fae's Dreams".
You all know by now that I do love making concepts for my art, so that behind each artwork is a story. This time my client had requested a Fae, but not your regular cutie one with wings, but a wicked one, a special one.
Perhaps some of you know already, I am not very good with sculpting faces, and so I was very skeptic about this order as I felt like I will make something very average and won't be pleased at all and neither will be a client. But recently I have purchased a lovely set of face moulds and so I decided to give it a try.
My client wanted to have a fae with the open eyes but my moulds all had closed eyes. I took the challenge and begun to practice. It took me 3 attempts to make her face and you can see from the small picture that the first two looked comic and one of them had to deal with my anger management problems! LOL! Yes I smacked her with the fist and poked the face many times with my ball tool. Don't make the duck angry! Ever! Well I also did struggle to understand how to do the lips and really struggled with the nose. As you can see from the original first picture, the nose had changed drastically from the original mould. So I did add a lot of my own sculpting onto the moulded base, including eyes, eyelids, completely new nose, more volume over the eyebrows and so on. It was really a process, which we Russians call :"The eyes are scared, but hands are working!", meaning that I was petrified from where I am heading with this and I was very happy with the result of the third mould. The nose turned to be more like an animal one, not because I wanted to, but because I couldn't do the normal human nose. Here, now you know all my weaknesses!
Another cool thing about this project which I have discovered in the process of it's creation was how to make human hands. I know mine ones are far away from the realistic ones, but still I am so pleased with the progress as I never did hands before! So first I made one that was too small, then I realised that the palm should be the size of her face and made another hand that did match the proportions. 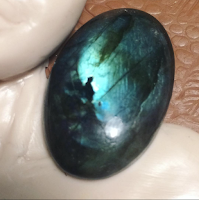 The third cool discovery was when I decided to choose a labradorite stone for the project. I have a small collection of them that always grows as I like buying more of them as they run out. So while selecting a perfect stone I found one that had an amazing scene in it. You must remember the game we played on Facebook named "What do you see?"
So as soon as I saw this stone, the story was born in my head.
Please switch on your imagination and go with me on a journey to the forest, where our little Fae (a fairy named Fae!) lived all of her life.

Fae was a little tiny fairy in her forest world and her life was so simple and everyday was the same as any other day. But one evening she was traveling next to the river and she saw a beautiful man standing next to the river fishing. He stood right under a huge willow tree and the light of the sun, that was beaming through the branches of the willow was lighting him up beautifully. never saw a man before and she was fascinated by his size, how strong and powerful he looked, so she fell in love with his beauty instantly. But of course, there is always some drama in every good story and as you all get it, Fae and human can't be together. She knew it from the start, but she kept coming to the willow every day to see him no matter what. One day the willow tree whispered to her through the voices of the leaves. Nobody could hear it but fairies and as she was the only one there, she was the only one who heard it. The willow said, that she observed the man for a long time and that she has noticed him being very sad. Once the man was even talking to himself, as there was no one around, but the willow was listening.
Willow had told the Fae that the man was very lonely and he carried a very deep scar from loosing a loved one once before and he had given a promise in front of the Willow, that he will never love again. When this was said, the willow cried and her tears started to fall down and few had dropped on the man, too. He didn't take a notice, but the Fae had picked one up and saved it. With time it turned hard and became as strong as a glass, but it preserved a memory of what the willow tree saw that day. Fae knew that she and the man will never be able to be together, but she was so pleased to have a vision of the man in the teardrop "memory stone" she had picked up under that the willow. In few months the lonely fisherman had stopped coming to fish under the willow and so the Fae was only left with her dreams and a teardrop of memories.
So that's the story! And that's the pictures of the Fae and her precious stone! 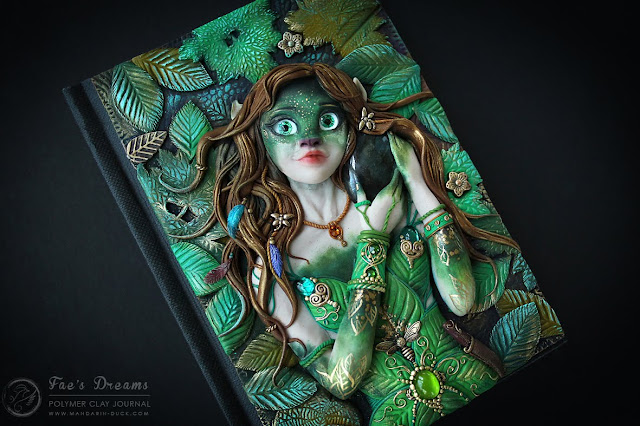 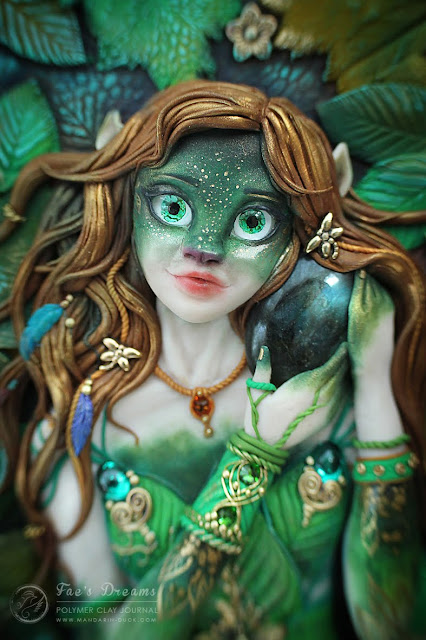 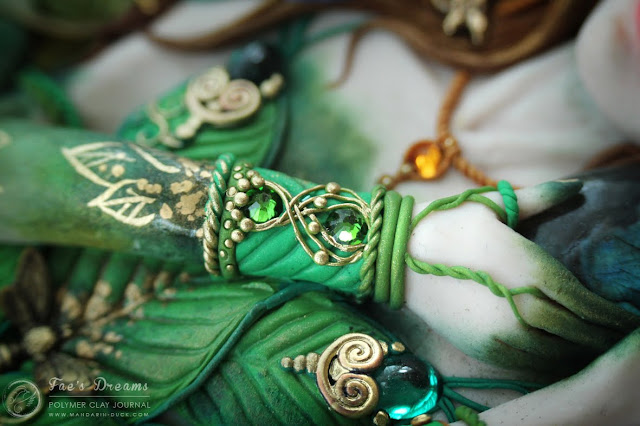 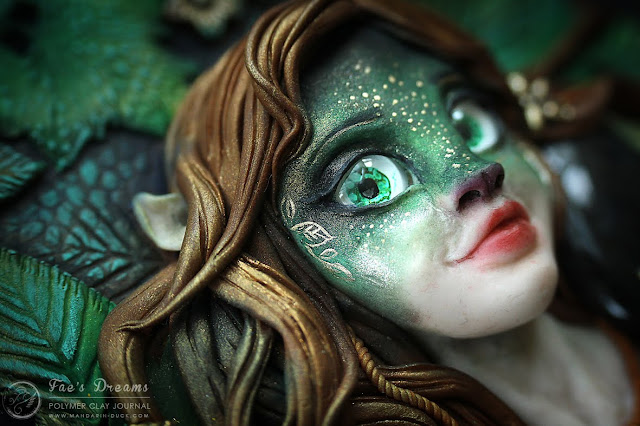 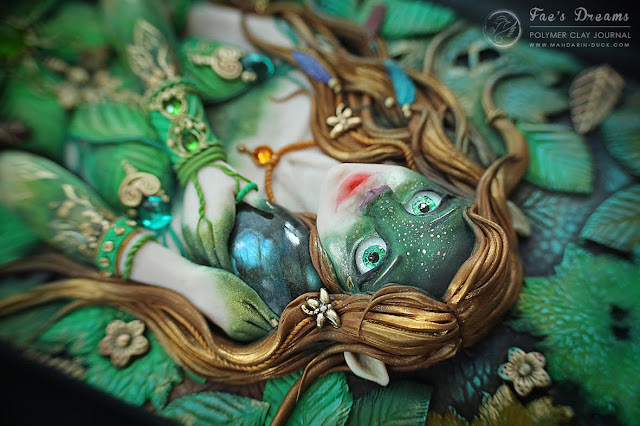 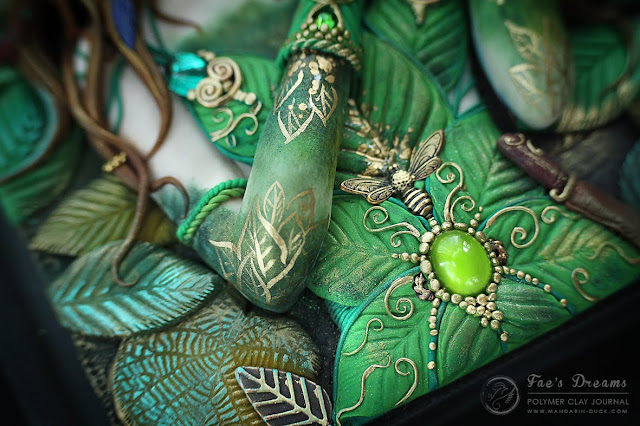 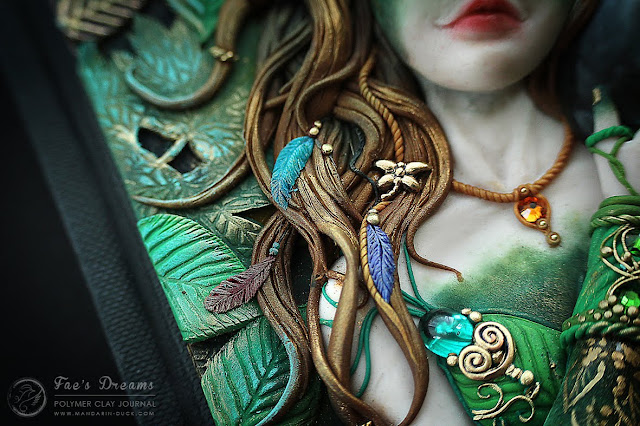 Thank you very much for reading,
Love & Peace,