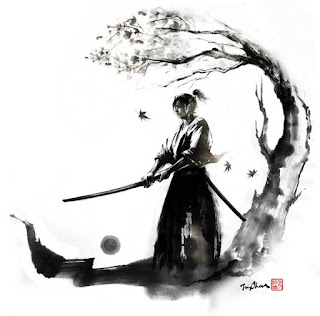 Today I would like to show you a journal I made as a custom order for a client that was local and fun to work with. My client had an idea that he wants to have a journal made for his girlfriend for Christmas. He said she loves Samurai art and Giraffes. He was willing on having both elements put into one work, but I kept insisting that he has to choose one as giraffes and  Samurai can't go together neither physically, not geographically or ethically. It just doesn't go! Period :)
So we stopped at Samurai and his preference was more of a classy side of Japanese art. We stoped at this picture gracefully painted by JungShan Ink and together we decided to work on a square journal. Just as well I had one and I really wanted to use it for some time. 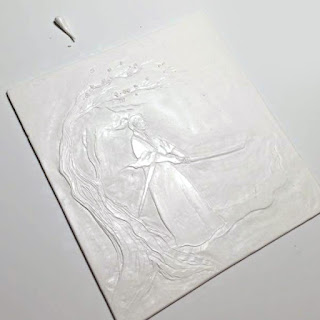 I didn't quite know where this journey will end and at this moment of time I was using my new claying/painting technique where first I engrave a little relief on raw white clay to show some volumes and then paint it all over. First I really wanted to keep it very simple, almost calligraphy style, but when I used my black ink, it turned purple when diluted  and so the artwork gained some colour. I also wanted the artwork look like it's painted on ancient yellowed down paper and that worked. 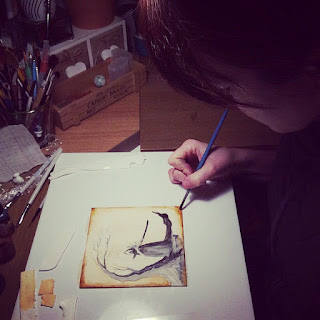 In general, I like painting with inks on my clay artworks before I cover them in acrylics. It might seem like a waste of time as I cover the majority of ink with acrylic paints anyway, but  it helps me out a lot as when the background is covered in colour, it's easier to paint on top of it with acrylics later and the white background doesn't shine through the multiple layers of paint. So all in all my Japanese samurai clay tile looked like this after it was first baked. I knew it's wasn't finished, but sometimes my artworks do not look completely right up until the very last moment when I put the very last finishing touches. So bare with me on this artwork and see the whole process. I started painting with acrylics as soon as it was baked and from there an idea of the sunset had appeared. Sometimes the whole colour scheme can arise from just a couple of correct brush strokes with the right colour. Same happened here. I decided that I was the Samurai and the tree to be backlit and I decided that the sun needs to be very warm yellow to achieve that kind of look. 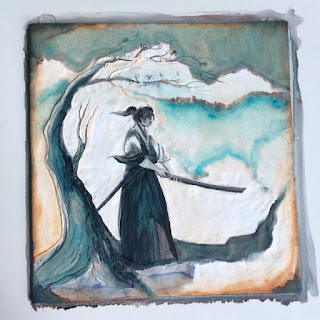 I've been also looking at quite a few mountain scenes which were painted in watercolour technique to understand how it would look like.
So you can see from the picture bellow that the result and the whole colour idea kinda remained similar to original watercolour effect I made with inks prior baking, but of course it has gained more depth, shadows, atmosphere and feel of realism. Although this hardly can be called a good painting, I am still very happy with the result as all in all across two covers and a spine, it looks like a nice composition and a story about a dedicated Samurai who rises before the sunrise to practice his skills, to meditate in a dance with his sword and to greet the sun respectfully. 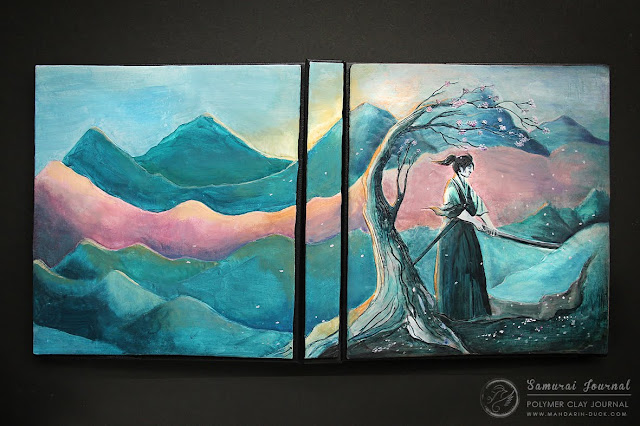 Thank you very much for reading,
Namaste ॐ